Many women of a certain age (well, mine) and a few men (you know who you are), cite the TV show That Girl as an early fashion influence – and not in a good way. There is a special tone in their voices when a certain topic comes up – always early in the conversation – that is a mixture of admiration, envy…. and contempt. Oh no, not at the show, but at our ­­­­­­­gullibility. “She (meaning Ann Marie, the character played by Marlo Thomas) always had a coat to match her outfit.” 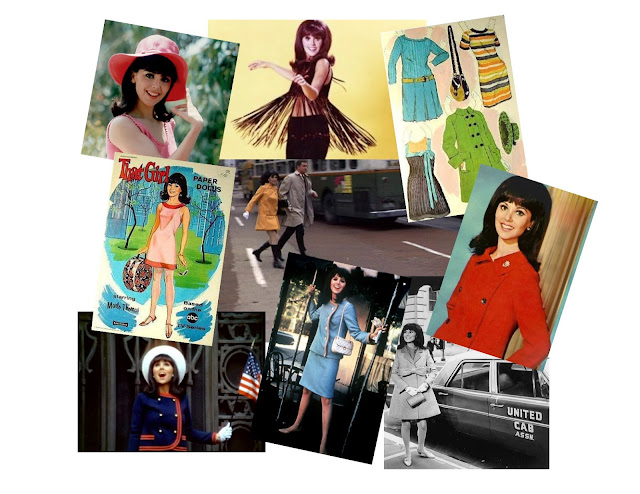 The perfect (and endless) wardrobe, the impeccable hair flip, the kooky first apartment, the doting and successful boyfriend – we were mesmerized by impossibly high standards every week. Most of us were either hitting or had just hit puberty so the sad fact that our hair was never, ever going to hold that set was just hitting home; though some of us are still clinging to the hope that a Don Hollinger-perfect boyfriend lurks in our future. The fantasy of that New York apartment on a struggling actress’s salary…well, the hilarity of that punchline really doesn’t hit you until you look for your first apartment here on a struggling any-career’s salary, and then the laughter is more slap-happy after seeing too many apartments the size of your closet in your parents’ home, climbing too many staircases to count, and being greeted in each by a cockroach as big as the doorman you won’t have.

The fantasy of that wardrobe…giving that up is a bitter pill to swallow, and some of us have a harder time than others letting it go. I am in a sewing class with a woman who has informed her sister she will not be joining her in a Florida retirement because she has too many plans to sew too many coats, and wool coats aren’t needed in Florida.

The reason I’m bringing all this up is because last night Mr. Smarty Pants and I hauled my lighter weight clothes down to our storage unit to exchange for some warmer clothes, and I was confronted by the fact that…Wow. I have really got a lot of clothes. And there’s more coming.

Some people get rid of their clothes because they go out of style, or because they wear them out, or whatever, but those people would not be me. I cling to my clothes like a life raft, and take care of them like Anna Wintour is going to call to borrow them for her next Met exhibition. This was less of a problem before I got married because a) that was some years ago and the problem hadn’t gotten quite this bad, b) when you live alone you really don’t care if stuff hangs from the bookshelves, and c) all the closet space here was mine. When it finally dawned on me that having a husband meant giving up closet space I specified that the future Mr. Smarty Pants was allowed to bring in his cats and a change of underwear, but in his first (and final) act of defiance he brought a work wardrobe with him and it has been a bone of contention ever since. Our compromise has been what keeps many New York City marriages together: a storage unit. 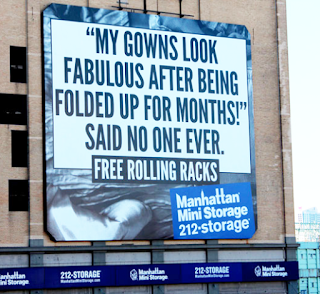 We pay rent on a room for things like beach chairs because we keep swearing “this year” is the year we’ll get back to the shore, photo albums we swear we’ll scan and share with the family, record albums we’ve already replaced in several formats, a cotton candy machine (yes, really), and my off-season clothes. Last night I came to the realization that – Yikes.

I have given away shopping bags of clothes – it seems like hundreds of them – to various thrift shops and loved ones over the past year. A couple of weeks ago I gave away 36 pairs jeans in a rainbow of colors because I realized that even though I can still zip them, the sight of me wearing bright pink or neon yellow skinny jeans is not going to make anyone’s day better. However last night we moved some boxes that hadn’t been moved for a while (unearthing treasures like my box of newspapers and magazines featuring my beloved Diana, Princess of Hearts), and found clothes that I had been looking for or thought were already in my closet at home. It was sobering.

Here’s the problem: I can wear them all again. Anything I would think of getting rid of is coming back in style. RIGHT NOW. Which means the next time I have to purge I will remember this time and dig my kitten heels in even deeper – nothing will go. Ever.

Case in point:  (I have been bludgeoning various people over the head with this for various reasons lately. Today’s it’s my argument in favor of keeping all of my clothes for the rest of my life.) 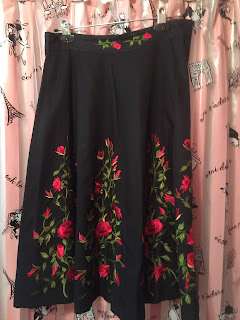 I bought this skirt in Neiman Marcus circa 1995. It’s a cute cotton six gore circle skirt, and I doubt many people – if any – who bought it still have it. The reason I bring it up now is because the next picture is of Dolce and Gabbana’s Spring/Summer 2016 collection, shown at Milan’s Fashion Week Fall 2015: 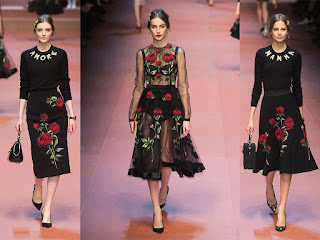 The skirt on the right makes my skirt hot again, and you better believe I’ll be running around town feeling superior and looking fetching in it.

Another case in point, and this surprises even me. 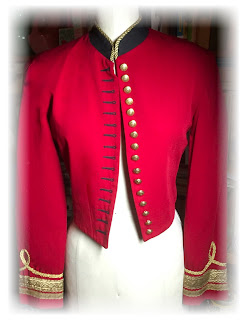 Even I doubted I’d wear this again, but…I dunno, maybe I thought I’d wear it as part of a majorette costume some day, or maybe because it was sparkly (I do love sparkly). Anyway, it’s been in my closet a while, and now much to my surprise (and probably their editors’), variations of it are appearing in Vogue and Harper’s Bazaar again. 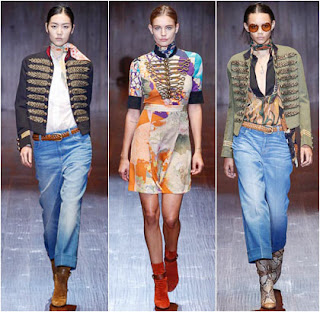 Now, I am by no means saying that my little red jacket is in the same league as the Gucci beauty. However, I am thinking that an investment in beaded appliqués plus an evening of hand sewing while binge watching TCM, and this little beauty is at the forefront of my closet again.

Just look at the money I’m saving! I mean, if you don’t count the rent I’ve paid over the years on the storage unit. I have tons of examples like this, but that would take the fun out of making an entrance in one of my now vintage wardrobe pieces, to a mixed chorus of oohs, ahhs, and where-the hell-did-you-dig-that-ups.

My husband is surprised that I have decided to let go of my collection of Michael Simon Christmas sweaters. We started dating in 1998, when these sweaters were – were they ever actually popular? Anyhow, that’s when I bought them. I had just spent my first Christmas with my future in-laws, it was the best ever, and in the next few years I got carried away wardrobe-wise (who, me?), resulting in the purchase of a holiday-themed bedazzled sweater collection that when the light hits it just right probably reflects off the Mars Rover. It is a sight to behold, and here’s just a part of it: 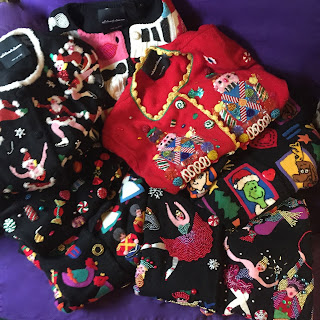 My particular favorite is the one that depicts The Nutcracker in every kind of bead, sequin, and variation thereof you can think of; competing with Balanchine’s version in every way but beauty and talent. It’s an eye-popper.

But that’s really not clearing out a lot of room; it’s really just showing good intentions. And when it comes right down to it, will I really let these memories go? Only time will tell, because I sure won’t.

But the people who grew up wanting – expecting – coats to match their outfits know what I’m talking about. We want the coats, the hats, the gloves, the shoes, the purses, the whole Werlé experience*. Years have passed, but each time we approach our closets we’re still Ann Marie.

Oh, and by the way…here’s a picture of me with Marlo Thomas when I was in high school and she was in town drumming up support for the Equal Rights Amendment. My best friend (who had just gotten her drivers license) and I (a few months away from my permit) got the lucky break of driving our idol around town that day. 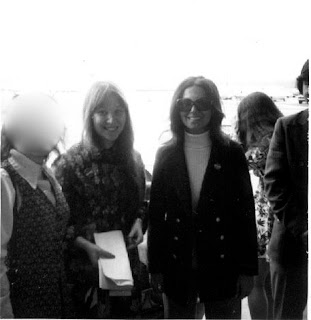 No, she wasn’t That Girl, but she was That Great; a wonderful memory that my BFF and I still giggle over. (I know she’s reading this, and I know she’s relieved her face isn’t visible, and that is why we’re BFFs.)

Yeah…we both still watch That Girl reruns when they’re on, and still have way too much in our closets (well, maybe one of us more than the other). Some things never change…like the contents of those closets. Which brings us back to the beginning…Yikes!

*Werlé was the designer for the first year of Ann Marie’s wardrobe, setting the style standard for the rest of the seasons. Loretta Young – another icon of movie and television wardrobe style – was Marlo Thomas’ godmother, and Werlé was her favored designer at that time. To make sure her goddaughter made the best possible impact on her show’s first season, she gifted Marlo with a complete season of Werlé clothes. That Girl, like most new half hour shows at that time, didn’t have a large wardrobe budget, so this was an incredibly thoughtful and generous gift. The show became a massive hit, the budget got bigger, and the show could afford to pick up the tab for Marlo’s clothing. The Ann Marie wardrobe is iconic, all because of a loving godmother. 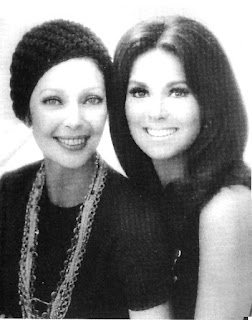