One Saturday night not that long ago I was looking for something a little different for us to do, so I picked a snazzy nightclub with a show featuring a drag version of Judy and Liza (you don’t really need last names, do you?) performing together again in all their glory. It sounded just goofy enough to lift our spirits after a long week, and just glamorous enough to remind us why we pay these ridiculous Manhattan rents.

For those who are not aware, there is a street right off Broadway known as Restaurant Row that is filled with really lovely places to keep your party going long into the night. The glory years of Manhattan nightlife -- El Morocco, The Stork Club, and Ricky Ricardo’s Tropicana -- are long past, but you can still savor a martini, have a wonderful meal, spot celebrities, and see some great entertainment. With that in mind I slapped on some lipstick, swirled out the door, and ran to meet Mr. Smarty Pants; all ready for a swanky night in Manhattan.


The show was great, but the only ones wearing anything sparkly were Judy, Liza, and me. All of the other women were wearing exactly what their husbands were wearing: the tee shirts and pants they had worn when they left their hotels earlier that day.

It made me sad – isn’t a lot of the fun of going out picking the right outfit? The ritual of getting all dressed up? Making an entrance? Is that just me?

A few nights later we went with some friends to a Broadway show. At intermission I looked down the aisle and spotted this gentleman: 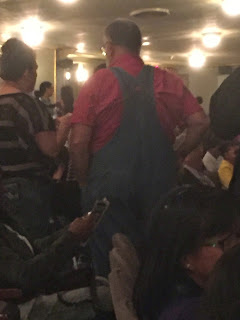 Yes, this was at a Broadway show – a full-on, $200-a-seat, legitimate, smack-on-Broadway show – the real deal. Now, I know there are those of you reading this who are thinking, “He paid for the seat. He can wear what he wants.” To that I reply a witty, “Shut up.” Not only is his outfit disrespectful to the artists involved in the production, but it makes the evening less special for everyone around him and, even if he’s not aware of it, to himself. No less an authority than Project Runway’s Tim Gunn said as much, when he referred to “the slobification of America.”

When you spiff yourself up it makes everything around you feel that much more special. You have declared this to be an event with something extra attached to it, and you start making yourself more invested in having a good time.


This delicious dress is here purely because I absolutely love it and it’s great to have a reason to post it. (Thanks to the Facebook group Mid Century Fashion for drawing it to my attention.) One of my cousins tells me her mom actually owned this dress, which kind of makes me feel that I’m related to this turquoise confection. 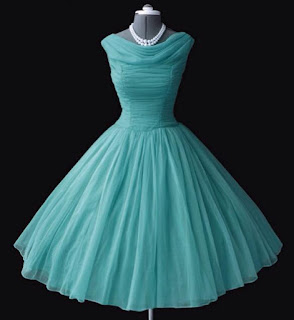 Sadly, most women don’t have pretty little frocks like this hanging in their closets any more. Most cocktail parties seem to be work related now; business attire and bored expressions are more prevalent than chiffon, kitten heels, and sharkskin suits. Mad Men started the conversation about women and men missing a better way of dressing.

Is it too much to ask to change into something…special? I’m not being gender specific here. I’m certainly not saying dresses and suits are The Be All End All for everyone. I’m not even saying what makes me feel special will make you feel special. I’m saying that if you wore it to plow the Lower 40 or clean your garage it’s not appropriate to wear to a venue where if the drinks come dressed with paper umbrellas, they would have better outfits than you.

If you already wore it to shop for groceries, go home and shuffle the hangers in your closet to hunt for something a little more upscale for your night on the town. If you’re going out to dinner at a place that doesn’t serve meals through a window in a paper bag, do yourself a favor and put on something that wouldn’t be considered athletic wear. And while you’re at it, think about making every one of your days a special occasion. Because if you do they actually do feel more special.

And by extension, so do you.