Well, I thought this would be a breeze this week – just write down what it’s like to go to a New York Fashion Week fashion show and then go back to my regular goofing off, but I think after this season (which ends this week), some big changes might be in store for the NYFW collections so I want to set down what’s happening and what I think the repercussions will be.

First, a (very) brief history. (Of course. It wouldn’t be me if there wasn’t some sort of gossip from the past brought in.) For that we have to time travel back to 1943….

Eleanor Lambert, a New York City publicist, is credited with starting New York Fashion Week; then just called Press Week. It sort of limped along until 1973, when New York was invited to join Paris in a joint fashion show for what was thought to be a fixed competition; because Paris was putting forth Yves Saint Laurent, Pierre Cardin, Emanuel Ungaro, Christian Dior, and Hubert de Givenchy, and America had no designers with reputations even near that level at the time. This became known as The Battle of Versailles, and in one of the all time great moments of fashion history (Read the book! See the documentary!), the Americans – represented by Bill Blass, Stephen Burrows, Halston, Anne Klein and Oscar de la Renta – started nothing less than a revolution (Liza Minnelli opened the show – seriously, read the book and see the documentary!). American fashion was put on the map, and after that was taken as seriously as the European ateliers.

Press Week, however, was still more than a bit unstructured, so in 1993 Fern Mallis, then Executive Director of the Council of Fashion Designers of America (the CDFA), worked to pull all of the American fashion designers connected with Press Week together and offered them a grouping of white tents in New York City’s Bryant Park as a venue for their shows. This not only meant that each designer no longer had to shoulder the costs of their own production (there’s a classic story of a seedy loft’s ceiling falling down during a Michael Kors show, which actually was the catalyst to get this whole ball rolling), but now the fashion press, models, makeup and hair people, major clients, and everyone else connected to the industry no longer had to run around the city to see the main fashion shows; they just had to move from one section to another. This was a seismic shift; by centralizing, New York fashion now competed with Paris and Milan’s Fashion Weeks, and again America rattled the cage of the global fashion market. 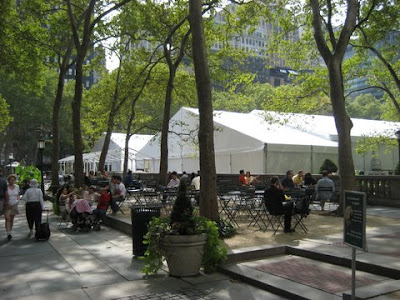 There were some changeovers in corporate ownership, an explosion in the number of designers involved, and in 2010 a location shift to Lincoln Center, but the convenience of most everything being under one roof remained the same. Then right around the time of the Fall/Winter 2015 collections it was announced that sponsorship had changed yet again; plus there would no longer be a centralized location.

Translation: the New York Spring/Summer 2016 collections were now going to be shown wherever the designers decided best suited their needs (and whenever they could get scheduled on the official NYFW calendar). Spaces were rented all over town, and depending on your profession (or your popularity, in some cases) it was now a real struggle figuring out how you were going to make it from X’s show on time for Y’s. However, for people like me, the weather was gorgeous, the clothes were glorious, the spaces and how they were used were intriguing…who cares about tomorrow? Hey…not my circus, not my monkeys, so I really wasn’t giving it a lot of thought.

Anyhow, let’s go back and linger a bit at the last shows ‘under the tents’ – Mercedes Benz Fashion Week held at Lincoln Center. I was extremely excited because I had scored tickets to a couple of shows that had been at the top of my Wish List for years, and the first one was on Day One of NYFW. 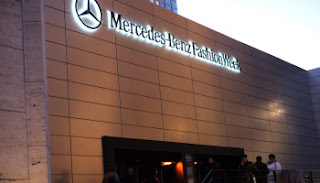 The day stands out for another reason, too. That week was not just cold; the wind chill factors had been in the minuses. When you think of putting outfits together to wear to Fashion Week, you don’t take into consideration what looks good over thermal long johns. While the papers were full of pictures of models who were going without coats because they wanted to flaunt their bodies or their outfits (or their stupidity – you choose), some press people (no, not Anna) just decided the hell with it and were wearing flannel pajamas under just about everything else they owned. I was thrilled to be there (I got my picture taken by a lot of press, but considering what I was surrounded by the flattery was muted), and the shows were every bit as wonderful as I had anticipated; definitely worth braving the sub-zero temps.

Which brings us to this year, and a very interesting weather factoid: New York City hit its coldest temperature since 1916 right in the middle of Fashion Week. Yeah – it’s been cold. Really, really cold, as in -16 degrees cold. And when it wasn’t cold it was snowing or sleeting. Those really high up the fashion food chain have their own cars to drive them around to the various shows, but the vast majority – and those people are ultimately what this is about, the press who write about the designers so they can up their profiles and therefore their prices, and the retailers who put the designers' clothes in their stores – are running around either trying to get car services or taxis, shivering or sloshing their way to the subways, fighting off frostbite in line waiting to get into the shows, looking for places to write/file their articles, contact their managers (at Lincoln Center there was a large area complete with desks, wifi, etc., so this was not a problem), trying to find food fast and cheap enough to be covered by their per diems (not always easy) to make it on time for the next show (again, Lincoln Center had accommodations for this)… 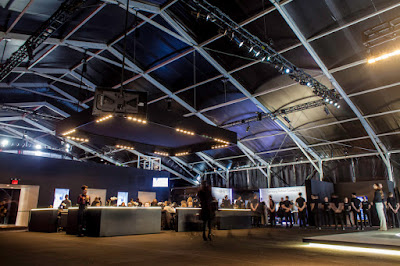 I’m seeing a problem here, and I’m not the only one. The natives are getting restless. This is a different generation; one that doesn’t feel a need to be inconvenienced if it doesn’t have to be. Even the large fashion magazines are having trouble keeping advertisers, newsstand sales have fallen off, and online readers are increasingly expecting content for free. Some magazines have already folded, and social media and bloggers (no, I’m not personally taking credit) have revolutionized the way the fashion industry is being covered. Why wait by your mailbox for something done months ago when what happened this morning is already online? The industry is already reeling from those changes; now the trick is to figure out how to handle what’s coming.

I stood shivering with a lot of fashion writers in the last week or so, and I heard a lot of love for the clothes but a lot of 'enough already' with the weather and the inconvenience. I love the whole atmosphere of a show, but a lot of these writers are over it – they are there for the clothes and the clothes only – and we live in an age where they can see them as immediately and as closely as they would if they were shivering in line waiting to get to their seats. Alexander McQueen was the first to live stream his collection, and that was way back in 2009. A majority of designers live stream their collections now, and the number of viewers are increasing. (In other words, the shows are there, but there’s a surprising -- at least to me -- lack of viewers.) We may be seeing a dramatic shift in that number as more and more people get accustomed to seeing shows online, or are even made aware that they’re available.

Now, nothing could replicate the experience of being in the same room with Raf Simon’s flowered walls:


but all the same, there’s a lot of money to be saved by not sending everyone on the staff of a smaller magazine, blog, or what have you, to a major city like New York, to see a designer that’s possibly not in the same realm as Raf and Karl. Online it’s all more democratic; less-than-big newspaper, small viewership – everyone gets to see the most coveted runways. On top of that, my city is anything but cheap, and to come here when there’s a major event and hotels and flights are booked to capacity means it’s even more expensive. Why not fly someone in when they can book a private interview with a designer, and get to see the line up close? Exclusivity, plus you still get to see the unveiling of the new collection at the same time as if you had been perched next to a Kardashian (but without the whole nasty bother of the paparazzi).

You can already see the results of this…where? Why, on Craigslist, of course! Tickets to shows that used to be impossible to get, invitations to parties the masses could only dream of clutching, are now for sale to anyone who can pony up the fee. People are getting jaded, and no one really wants to go out in this weather, so it seems the feeling is why not make a quick buck. That certainly takes the shiny off it for the people who the designers/corporations begged (or paid) to be there.

And then there’s Tom Ford, who cancelled his February show altogether, electing to show and sell his Fall/Winter collection in – are you ready – September (yes!), when it’s more appropriate for the season; setting a “see-now-buy-now” model. Imagine! I’m sure a lot of designers are sitting around conference tables right now wrestling with this concept. Burberry has already jumped on board.

So, I didn’t come through with my promise of what it’s like to attend a New York Fashion Week fashion show, at least not this time. It may be irrelevant information soon, but I promise I will next time…unless something more interesting comes up in the meantime. ‘Til then, you can feast on this: Malan Breton’s New York Fashion Week 2016 Fall/Winter Collection, and you don’t even have to shiver in line to see it!

'Til next time, stay warm and have fun doing it,

Whoops! Almost forgot to remind you that to make sure you don’t miss my next entry, why not subscribe to my blog? Just fill in the “Follow by Email” blank on the upper right of this page and I’ll magically appear in your inbox whenever I get around to writing one of these things. I promise I won’t sell your information (I’m not that industrious), and you’ll only hear from me when I post here. Also, you can follow me on Twitter, on Facebook…on the streets of Manhattan…