Once upon a time there was a spectacular exhibit on fairytales that was as imaginative as its subject matter…. 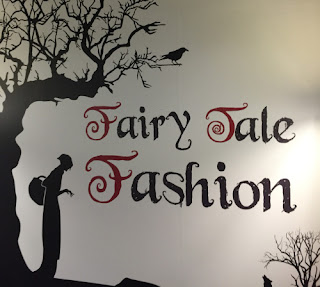 I have a confession. I kept putting off writing about the Museum at FIT’s Fairy Tale Fashion exhibition because it’s the most difficult to capture in words. Not that there’s not a lot to say – there’s plenty. It’s just that, well, it’s so fabulous that almost from the minute I got there I just got lost in it, and I’m really struggling to find a way to bring that experience to you.

The most important point I want to get across is that this is not a costume exhibit; it is fashion. In another context most of these garments would just be incredible pieces of clothing; although some would definitely drop hints to their fairytale inspirations. The majority, however, were curated to coordinate with the theme of the story they were selected to illustrate, and when you see them in that setting you will be struck by how inevitable the selection appears. Just like a ballerina who makes those pirouettes en pointe look effortless, and just like the pianist who makes those intricate runs up the keys appear as easy as drumming your fingers, pulling the right garments from the F.I.T. archives and convincing designers and collectors to loan those rare pieces must have taken incredible research, culling, and a whole lot of begging.

And now…on with the show!


First up is Little Red Riding Hood. (Thanks, MFIT, for these incredible images!) After you stop looking at the variety of, well, red riding hoods, let me draw your attention to the lower left corner. What you’re seeing is a monitor that is showing:

Each story had its own section, and each section had its own monitor showing a movie clip, anime selection, commercial, or whatever best suited the fairytale being ‘told.’ Most of these were particular favorites of mine, but I was with someone who was unfamiliar with the majority and she was hypnotized. Every particle of this exhibit grabs your attention and you have to pull yourself away to move on.

As for those red cloaks, you can read more about them on the MFIT website (link at the bottom of this entry), but I want to draw your attention to a few of the mannequins here. First, second from the left: the wolf. Seriously, how cute is that? Now, look to the two cloaks to the right. The one to the far right was designed by Rei Kawakubo (and was modeled by Björk

Next up was Beauty and the Beast, or La Belle et la Bête, because the movie clip on the monitor was from the Jean Cocteau French classic.

MFIT is more generous with their clips than I am, but trust me – if you haven’t seen this one, you just gotta. The whole thing is available on YouTube, but if you ever get a chance to see it in a theater…run.


This showcase demonstrates another great thing about the exhibit. You’ve got a court dress from the mid-1700s in the same showcase as that exquisite Rodarte on the far right. Both have flowers, both have feathers…what a difference a few centuries make! 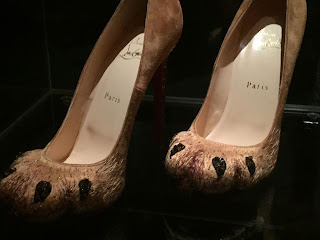 How perfect is this Christian Louboutin shoe from Fall 2011. The ‘fur’ is actually really dense embroidery, and the ‘claws’ are rhinestones. They must have really added some great whimsy to a fun outfit. I wish I knew who bought them, and what the rest of their getup looked like.

Alice In Wonderland popped up next.


I could spend hours at any one of these cases, and to prove that I’d like to point out that shoe in the front: 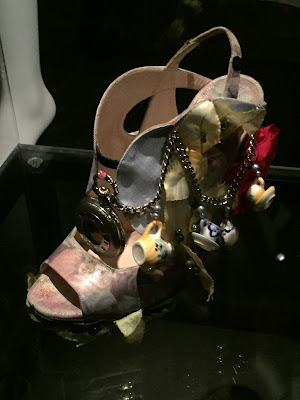 That’s a Nicholas Kirkwood from 2010, and the reason I bring it up is because I could swear it was in a previous MFIT exhibit a few years ago -- maybe on shoes? – and the reason I remember it is because I think I did spend a really, really long time staring at it. Really really, it’s fabulous.
Okay, so let’s just breeze by these two beauties that were stuck away in a corner… 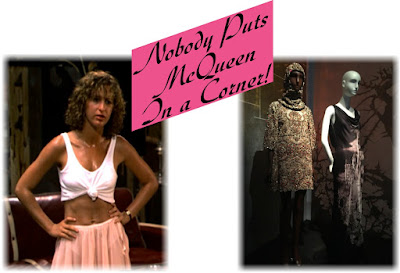 Along the back wall were two fairytales: The Little Mermaid, and The Swan Maidens. First, let’s go under the sea.

How perfect is that Rodarte – iridescent turquoise sequins, fishnet, etc. – for this exhibit? The silver Thierry Mugler? Charles James’ La Siréne (far left), sometimes referred to as "The Lobster," was a gift to the museum “…in memory of Lisa Kirk,” an actress probably best known for originating the role of Bianca in Cole Porter’s Kiss Me Kate. I’d love to know what else her wardrobe yielded.

I mean…”breathtaking” is not used figuratively here. There were points in this gallery where I literally gasped at the sheer beauty in front of me, or the way a piece was used to illustrate a story. Pull your eyes away from Jean Louis Sabaji’s feather-like pouf of a dress (no feathers – tattered silk!) and look to its left. The black dress is Charles James’ Swan (another gift in memory of Lisa Kirk). James has long been one of my favorite designers, but he had a pretty checkered career and been all but forgotten before the Metropolitan Museum brought him back into the spotlight with the Charles James: Beyond Fashion exhibit in May 2014. I think it speaks to how revered The Fashion Institute of Technology, their museum, and staff are; that people who hold these rare pieces bequeath them such precious pieces of fashion history.

I’m not sure where to stop. Do I cut myself off at The Red Shoes?


And leave out this Stephen Jones hat? Look at those teeny tiny toe shoes on there! 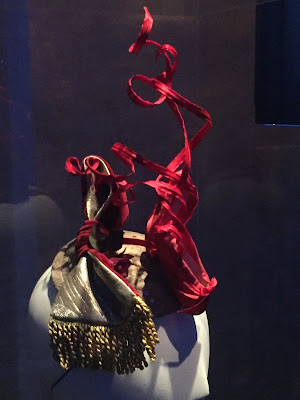 This is killing me!

By this time I’d passed The Wizard of Oz, which had fashion by MGM’s Adrian – no, not one of the costumes he designed for the movie, but one of the dresses he designed when he left MGM and opened his own couture and ready-to-wear businesses. Here’s a Galliano…there’s a Molyneux…Oh look! A Judith Leiber apple bag is there to poison Snow White! That sense of childlike wonder held throughout the maze of the gallery.

Cinderella! Rapunzel! Sleeping Beauty! The Snow Queen! And on and on and on….It was truly enchanting, like the best fairytales.
There is a book coming out on the exhibition, but it won’t be available until mid-April; when the exhibit itself closes. There is a sample copy available to flip through, but sadly it doesn’t capture the magic of the gallery. Most of the pictures are the dresses on the runway, and that changes things. Out of the fairytale context, and without the special lighting that hits the glass shoes, shards of mirror on dresses, or beading just so, the effect is more flat than flattering.

Just a word here about doing your own photography in the gallery. Textiles are delicate, and to preserve garments, accessories and notions against fading and wear lighting is kept low in the exhibits. Most galleries will allow you to take photographs, but NOT WITH A FLASH. First time will get you a warning; I’m not sure how many times it takes to get yourself ushered out but I’ve witnessed it happen at several museums. Just like you remember to turn your phone off before the curtain goes up in a theater (you do, right?), remember to keep your hands off the garments and take your flash off automatic in a museum. It’s just what you do.


This entry could have been as long as Rapunzel’s braid, but let me end here so you can go over to the MFIT website and enjoy the rest of their pictures. Be sure to spend some time looking at the Art & Illustration section, because there were some incredible photographs and illustrations on display in addition to the clothing. I’ve been sad when some of their other exhibitions ended (I really wish the Daphne Guinness collection could have been permanent, but I guess she wanted to wear her clothes again), but this one….I’ll be telling people about this one for years.

Fairy Tale Fashion at The Museum at FIT
By the way, Fashion Week NYC starts in a few days! Always an exciting time to be here if you’re involved in the fashion industry in any way. My next blog entry will be what it’s like to go to an actual fashion show (when you’re not Anna Wintour, that is). If all you've seen are the ones in movies or on Project Runway, well, reality is quite a bit different.

To make sure you don’t miss it, why not subscribe to my blog? Just fill in the “Follow by Email” blank on the upper right of this page and I’ll magically appear in your inbox whenever I get around to writing one of these things. I promise I won’t sell your information (I’m not that industrious), and you’ll only hear from me when I post here.

In the meantime, how about just a little bit more fairytale magic…