A Tale of Two Museums (Part One)

A friend was in from out of town and wanted to squeeze in the two costume exhibits I’d been talking about all in one short day. It sounds easier than it is. If you just like clothes it’s easy to stop, declare “I would/wouldn’t wear that,” and move on, but for a true fashion aficionado you (meaning me) want to take in every detail; every choice of button and buttonhole, the feel of the fabric, the nuance of color and pattern, etc. Two people with those vastly different outlooks means one is always falling behind while the other is looking around wondering where their friend got stuck, but good friends know each other, and better than that, put up with each other.

We started at The Museum at F.I.T., but let’s start with the our second stop of the day, Jacqueline de Ribes: The Art of Style at the Metropolitan Museum, and I’ll save F.I.T. for another entry another day. 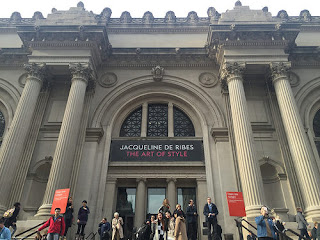 For those of you who may have missed her on your radar, the Comtesse (yes indeedy) de Ribes  has been grouped by photographer Richard Avedon as a “swan;” a sort of adjunct to the official Capote “swans,” I suppose.  In case you missed the memo, in the October 1959 issue of Harper’s Bazaar Truman Capote gave his definitive definition of a select group of women who stand apart from – above – the rest of our gender:

These are officially recognized to be: Babe Paley (the Swan Queen), Slim Keith, Lee Radziwill, C. Z. Guest, Gloria Guinness, Marella Agnelli and Gloria Vanderbilt. At some point Richard Avedon added la Comtesse Jacqueline de Ribes to the list, much to her displeasure. She feels that this sobriquet misrepresents their lives; giving the appearance of less depth and purpose. (If it makes her feel any better, I’ve never seen her name mentioned as a swan before this. If your feelings are hurt that you’re not on the list, cheer up; I’m not on it either and I got over it a few years ago.)

Jacqueline de Ribes is proud of her achievements and not without reason; many women in her position could have just spent their time lunching and shopping. De Ribes did a great deal more than shopping – she was known as a great stylist, which means she knew how to accessorize what she bought. She also did some designing, a great deal of charity work, a whole bunch of socializing, held a position I yearn for (Muse), and for these achievements was inducted as a Chevalier of the Legion of Honor in 2010 for her lifetime dedication “to the support and encouragement of environmental, medical, cultural, and artistic initiatives.” That’s quite a spectrum to cover.

So let’s get to what we came here for…the clothes. All the big European houses were represented: Dior, Valentino, Ungaro, YSL…and Banana Republic? Yes! Underneath that YSL coat on the left is a Banana Republic cashmere turtleneck. She knew what she wanted – the color, the collar, the weight of the yarn –  how that sweater caught her eye is something I’d love to discuss with her, but dammit if she wasn’t right: it’s just the right thing to set off that printed wool flannel coat.

I realize I’m coming off snarky about all this and not at all like a person de Ribes would want to find assigned to her table at a wedding, but this might explain a little: the person who put this exhibition together chose as background music one of my personal favorites (and possibly yours, it’s a pretty popular selection), Chopin’s Waltz In C-Sharp Minor; except not the entire piece. A very small piece was excerpted (“Theme A,” if you will), which runs approximately the length of an average television commercial. It is played over and over and over... it felt like I was being waterboarded by Chopin. Now, if you are going to skip through this exhibition in, say, twenty minutes, this may be just a minor annoyance. When you hit, say, the twenty one minute mark madness sets in. At some point after that…you wanna kick that swan.

Also, file this under Things That Make Me Go Hmmmm. One of the exhibition cards noted that la Comtesse was wearing liquid eyeliner before liquid eyeliner was invented. Now, eyeliner has been around since at least Cleopatra’s time, and our Jacqueline was born in 1929 A.D. What was so different about her invention from, say, Maybelline’s 1930s cream or cake beauty aids? Inquiring minds…. 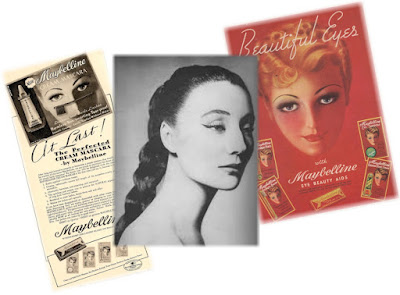 Another exhibition card that caught me up short was related to a Marc Bohan dress when he was designing for the House of Dior. De Ribes moved a decorative flower from the hip to her shoulder; when Bohan ran into her at a party he asked her something along the lines of “Is it mine,” and she answered adorably something along the lines of “Officially.” Now that is a sweet story, but I think I may be missing a piece here because couture houses regularly alter their designs to better suit their clients, and I don’t know many women who don’t move things like big flowers off their hips because few women can handle big satin and rhinestone flowers smack dab on their hip bones, even if they are “walking fashion illustrations.” Even if they look cute as hell it’s going to bump into a lot of things (dancing partners, to mention one off the top of my head; this crowd doesn’t strike me as the type for buffet tables), and don’t we all want the attention to be up on our faces (to show off the eyeliner we invented)? Is this just me? And Jacqueline? 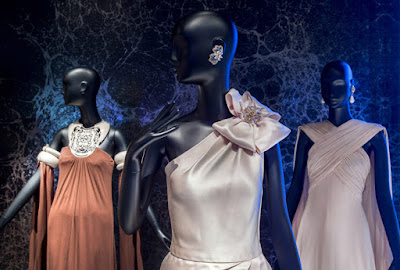 To say that Jacqueline de Ribes was born to wear these garments is an understatement. Seeing them on display is a way to admire the craftsmanship and glimpse the taste of the woman who wore them, but to really appreciate them you need to see pictures of her wearing them; her personality, her chicness, her soigné cannot be captured by an inanimate mannequin. 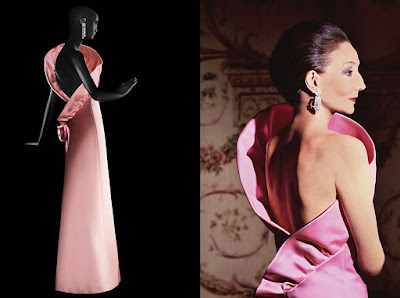 There is a wall of magazine layouts featuring de Ribes at various times in her life, various homes, parties, etc., and…there is just something about her that jumps out of those pictures. 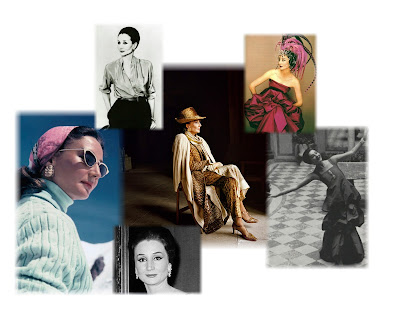 The clothes she designed herself seem to feature ruffles, which are there not merely as a trim but to serve a higher purpose; drawing attention to the curve of a perfect shoulder blade leading to wherever your imagination allows, or to flutter with every movement making the wearer irresistible to watch.
I would love to see these blue ruffles (a collaboration with Yves St. Laurent, who designed the sequined dress on the left) in motion.

While her clothing designs are without question lovely, it is interesting to note that she was very spare with accessories with her own designs. She used her clothing to accessorize the human body. One quote of hers emblazoned on the walls surrounding the displays is:


"Christian Dior said you could not be elegant and sexy at the same time. My answer... No. It is just more difficult."

With her elegant, minimalist designs she achieved just that. My guess is that once one of these dresses entered a room all the other frocks faded into the background. Mystery lurks there.

My friend remarked that it was a shame that all these gowns would be worn once and then never worn again, but I replied I doubted that; a great stylist knows how to make something look different. I believe my theory was proven at a section of the exhibition with three YSL dresses. Purchased at the time Yves St. Laurent was selling the business and retiring, de Ribes (like many others) rushed to order the last of the true St. Laurent. What is of interest here is that she did not order from the current collection, but rather her favorite gown from an older collection, and she ordered it in three colors. She loved that dress, knew she looked great in it, and knew she could reinvent it each time she wore it. As with the Banana Republic turtleneck, these are the things that make de Ribes less “swan” and more human to me.

La Comtesse was determined to get one of her all time favorite dresses included in this tribute, but sadly the dress in question no longer existed. The Met curator explained they do not do reproductions; de Ribes does not take no for an answer. She remembered every detail, every tuck, every everything about that dress and worked to have a perfect reproduction made (with a slight change…the color) and included here. I can understand why. First, there is simply no other dress like it, and to just have a picture really wouldn’t do it justice, and second, anyone who has ever had a dress they loved – not just a favorite, but a dress they can remember so vividly they can recall how the collar felt on their neck, how the cuff hit just so, how the fabric sounded – knows what it is like to need to have that dress represented. It is not just another beautiful gown; it is a collection of memories, the gift of a glimpse of your best times, gathered up and presented with love. I’m so glad she was able to override that restriction. 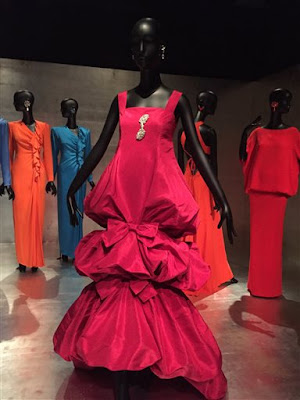 Now that I’ve vented about the music loop and taken something for my JdR Costume Exhibit headache, I’m feeling a little more sanguine about the experience. Still, I can’t say this is one of my favorites, or even that I’d tell someone that wasn’t a die-hard fashion fan to rush to see it. The Powers That Be at the Met didn’t think that this year’s major exhibition, the exquisite China: Through a Looking Glass, would be as popular as it was, so it was cut short to make way for this small collection, which is a shame because China was brilliantly done and this is… very nice.

It’s worth noting that if you want the book that accompanies this exhibit it is only available at or through the Metropolitan Museum, for reasons best known to them since as far as I know all the other books to their exhibits have been available in other venues; including traditional and online bookstores. It’s a wonderful way to enjoy the collection if you can’t get there, and a valuable resource for fashion and high society mavens.

I don’t think I’m going to win any new friends with this lukewarm love letter. Next time I’ll tell you about what the Museum at F.I.T. is offering. That’s so fabulous it’s worth the price of a ticket to New York.

I can’t end this without some sort of tribute to one of the leading fashion icons of my generation who passed away just a few days ago. When this music video came out everything about it was cutting edge. His last work, Lazarus, is ahead of its time, too, but it’s just too…too much for a flip blog. Much love and thanks to David Bowie. No need for an explanation.

Wishing you the best of everything,