A Tale of Two Museums (Redux)

So when we last met I escorted you through the Jacqueline de Ribes Exhibition at the Metropolitan Museum. It was lovely…ish. Maybe I would have been more enthusiastic had I not just come from The Museum at FIT. One of the few museums in the world devoted strictly to fashion, MFIT is a division of the Fashion Institute of Technology, itself a division of the New York State university system (SUNY). It is logical, therefore, that the mission of the museum is to teach, and…mission accomplished each and every time they open a show. Whenever I see their latest offering I can’t wait to see what they’re going to come up with next. Maybe it just wasn’t fair to see anything after going here; MFIT is a tough act to follow.

The museum is tucked away in one of the college’s main buildings, and because of the limited space they can’t compete with the grand size of the exhibitions of the more famous costume and fashion shows at museums like Metropolitan or the Victoria and Albert. It is, however, comparable to a Fabergé egg: exquisitely crafted, always the finest of materials used, with a hidden surprise inside.

So let’s start with their current amuse-bouche before going on to the main event, shall we? Yes, it’s hard to believe that a museum this tiny could warrant two entries all its own – and one on a fabric, no less! – but MFIT really does it right. It’s also a great way to demonstrate what makes a fashion exhibit outstanding, rather than a merely a mass of gorgeous clothes.


The textile in question this time is….drumroll…denim! 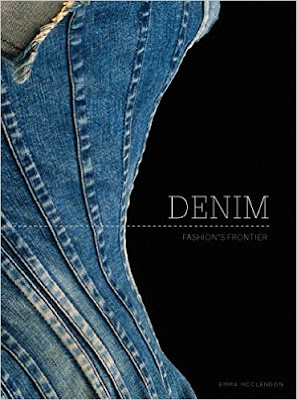 It’s quite possible that you might find something in your closet under a spotlight. In fact, it might be the first thing you see when you walk in.


That’s right – the good ol’ 501 button fly. They look kind of different on display in a museum than when they’re all wadded up in a corner of your bedroom, don’t they? 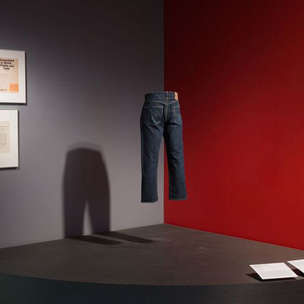 The show covers denim from the 1800s until practically tomorrow, and here’s the thing about MFIT: you don’t find the same old/same old there. You’ll get to see historic garments you’ve only seen in textbooks or recreated in movies. These are work pants from the 1840s, and I have to say I find the cut of the waistband very intriguing. 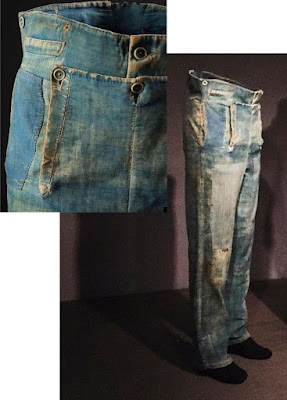 Here’s the poster and the garment that helped win WWII! Some of us are still rocking Rosie the Riveter’s jumpsuit and bandana today. (Check out my own picture to the right of this essay.) 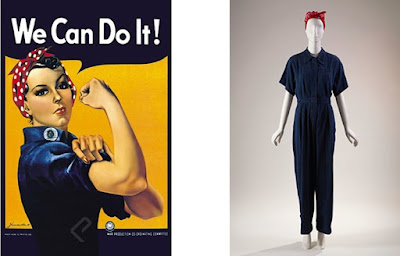 I really have to applaud a curator who’s able to demonstrate the connection between a prison uniform and haute couture by Elsa Schiaparelli, and make a stop in between for the first ready-to-wear denim dress; Claire McCardell’s “Pop Over.” (I love that the pockets look like pot holders; at least they do to me.) 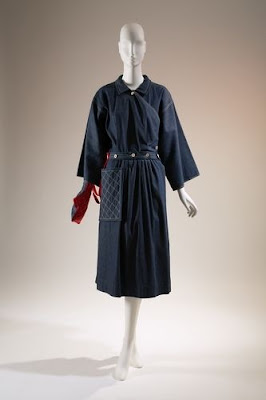 I loved how they peppered the aisles with monitors showing old television commercials, huge mock-ups of past newspaper and magazine ads, and interspersed different designers and eras when it helped to illustrate a point, rather than keep everything in chronological order.

At one point the television channel was turned to high end designer jeans…you know, I thought back then I never wanted to hear this ad again, and it turns out I was right. No nostalgia for this at all.

On the flip side, though, I found myself hypnotized by this iconic ad from the late 70s - early 80s. That was the time it seemed to be played every commercial break, and people of a certain generation (meaning mine) can still sing that jingle. Who was that girl? I really did want to know her better! As far as I know she was never identified and hasn’t stepped forward, although ‘Real Housewife of New York’ Princess (no joke) Carole Radziwell recently claimed to have been the Jordache fit model. (Ummmm…okay. If you say so.)

Sure, the jeans were nice, but I’m still waiting for the commercial telling me where I can buy her hair. Spectacular.

Of particular interest to me was how inventive trendsetters and artists used a ubiquitous garment like jeans and made theirs unique, and then how fashion houses took the style back by outright stealing ideas from the trendsetters, then branding it as their own to make a fortune. Witness the following: 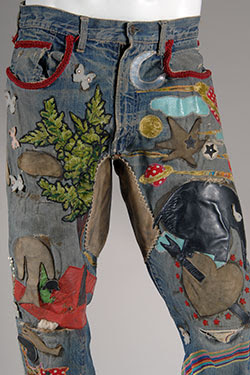 Ahhhhh….these brought back memories. I spent one entire summer embroidering a pair of my boyfriend’s jeans – and denim is not easy, people – with a Hobbit theme, no less (his favorite book; great foreboding I did not recognize as I was not then nor am I now into Hobbits). What can I say other than I was young and there wasn’t much else to do that summer except listen to Carol King’s Tapestry. We broke up within days of my finishing those jeans. I promise you I am not the only one telling that sad tale.

These jeans …well…these are a different story. 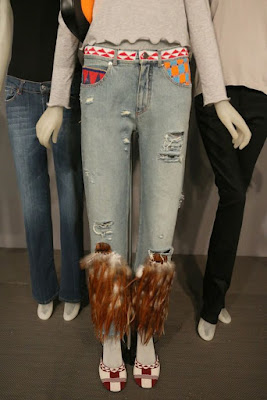 Those are Tom Ford jeans from 1999, and I’m betting every former Brownie, Girl Scout and Campfire Girl that walked through that exhibit stopped dead in her tracks when she saw the description card for those beauties. “When they reached stores they cost up to $3,800, which stunned the press.” Are you kidding? The press wasn’t the only one stunned. Maybe I didn’t strain my eyes and prick my fingers all those years ago just for some long lost Arts & Crafts patch; with winter keeping me inside more it may be time to break out the loom and beads and bedazzle the bejesus out of some pair of jeans stuffed at the bottom of our hamper. (I’d leave off the feathers; among many other reasons that’s a dry cleaning nightmare.)


I went with a friend who started frothing at the mouth when she saw the slung-below-the-undies jeans, but I pushed past so I could drool over the circle skirt that was a veritable salute to vegetables, a food group that I love even more when it’s done in applique. 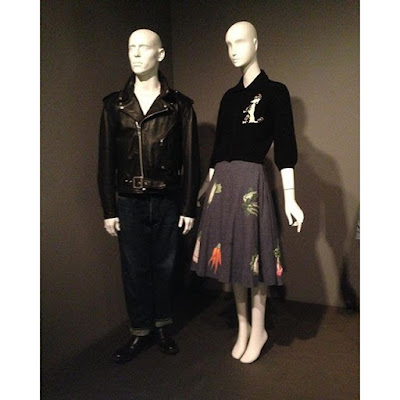 This was part of a 50s grouping, which brought to light the fact The Denim Council was formed in 1955 to turn around an image that was being formed about the fabric; that the main consumers were biker gangs and juvenile delinquents. So much for all those cowboy shows that were on TV at the time; I guess Marlon Brando’s The Wild One and Mamie Van Doren’s juvenile delinquent exploitation films trumped TV’s Gunsmoke. Compare the outfit on the left to this: 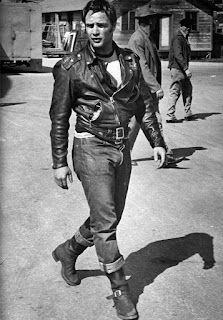 After The Denim Council was created we got movies like April Love, which starred Pat Boone as the juvenile delinquent. Yes, really. 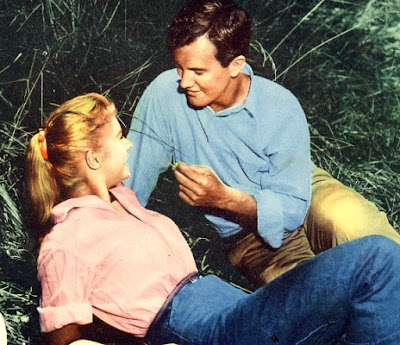 Be sure to send The Council a thank you note. They must have loved this next hit. (Actually, I do, too.) Eddie Fisher and his Dungaree Doll.

The Museum at FIT manages with every exhibit, no matter how large or small, fanciful or mundane, to make my experience there memorable. This small exhibit on denim made something that could have been pedestrian come alive. Push it to the top of your Must See list.

Next time I’ll give you my impression of MFIT’s Fairytale Fashion, the current show in the Special Exhibitions Gallery.


Here's a hint of my reaction: Fairytales can come true....

My sincere congratulations to Malan Breton for winning The Fashion Group International's Rising Star award this year for his menswear line Malan Breton Homme. I’m a fan of all of his fashion lines, but his line for men this year made this recognition inevitable. Only Malan was surprised. 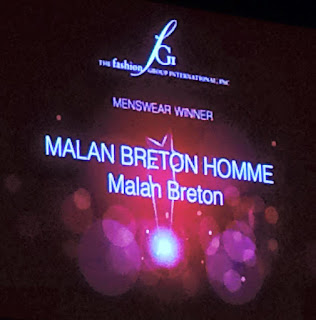